Read the conversation on Artsy: The Collage Interview

“I am looking to explore the boundaries of collage, identify artists pushing the medium forward, and inspire others along the way.”

“My work, like my mind, is a combination of comedy and chaos…”

Scroll down for full curator’s statement. 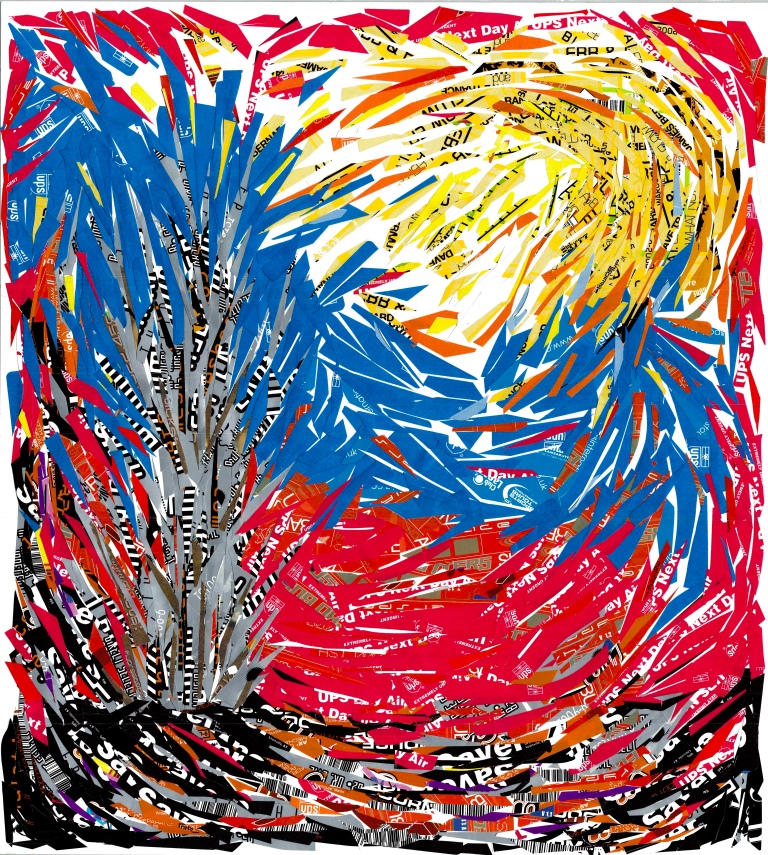 Jesse Treece, City of the Dead

Curator’s statement:I am looking to explore the boundaries of collage, identify artists pushing the medium forward, and inspire others along the way.  For a long time, collage was treated as a second-rate art form. But in the last 20 years, I’ve seen collage embraced by a new generation of artists and collectors all over the world.In 2013, I founded the Brooklyn Collage Collective, which consists of four core members: me, Jessie Laura, Joseph Karwacki, and Michele Luger. The Brooklyn Collage Collective has worked and exhibited with other collage artists all over the world. All it took was one small idea that eventually grew like a forest fire. We’ve now reached as far as London, Australia, and Italy. In May, Savannah Spirit introduced me to Undercurrent founder Katie Peyton. Savannah recently exhibited with Katie, and Katie was looking to use the online platform to juxtapose established voices with emerging and less-heard voices in a medium. For this exhibition, I’ve brought together an exhibition of artists who are significantly influencing the scene right now, alongside up-and-coming voices with fresh styles and messages. I first chose collage veteran Michael Anderson, an influential force in the collage scene since the early 90s, who is well-known for his pop-heavy mashups and street art vibe. He then selected two other collage artists, those of which have helped to grandfather a style that has influenced thousands of other collage artists for years. They are Nick Baccari (@Mr.Babies) and Jesse Treece. It was obvious that the all-star cast of the Brooklyn Collage Collective would be included.   Jesse Treece gave us a bit of insight to his approach to collage, “With my work I’m trying to convey inner worlds that have a feeling of being able to step into them. I use vintage material, so there is an element of nostalgia, but I’m more interested in creating something timeless or outside of time. For this reason I try to avoid obvious pop culture references as much as possible. Also, while the images may tell a story, the interpretation is up to the viewer. I’m more focused on creating an atmosphere or mood. I’m kind of a film geek, especially for old Horror, sci-fi, etc. so I’m sure that plays a big roll in my process”.Nick Baccari: “My work represents worlds that I wish I could escape to especially when created during tense times in my life mostly created by anxiety. I like to explore the juxtaposition of everyday life with raw psychedelic backdrops or foregrounds.”Kike Congrains is a collage artist located in Lima, Peru. He’s a self-taught artist working primarily with paper: analog collage, sculpture and paper toys. He has participated in various group exhibitions around the world including Norway, Argentina, Scotland and Spain and has curated under the name Collage Wave, which has an international following. Kike works based on clippings from old magazines and colored cardstock paper. For some years now Kike has been giving collage workshops to underprivileged kids in the outskirts of Lima, helping them find and nurture their passion for art.Sam Ben-Meir, PhD, began his career as an artist drawing political cartoons which have been published in periodicals worldwide, including the Jerusalem Post and Huffington Post. His most recent collage pieces make use of stickers. Ben-Meir is an accomplished jazz instrumentalist and composer. He teaches philosophy and comparative religion at Mercy College in New York City, and writes articles on environmental ethics, art history, and politics. Jessie Laura is an art director and mixed media artist. Born in Lima, Perú, she holds a Bachelor of Arts in Graphic Design. Laura moved to New York and now works as a freelance designer, and artist. She creates analog collages, which she has recently began exhibiting throughout NYC. She became a member of the Brooklyn Collage Collective in 2017.Michele Luger‘s work explores many elements of human emotion and the ways in which we mask our true feelings with the ones we’re told are acceptable, causing us to be false and unrecognizable to even ourselves. She often works by “cutting” around the images she wants to save with paint creating a collage feel without physically cutting and pasting. She also collages with her own drawings mixing them with images pulled from magazines and newspapers.Joseph Karwacki explain’s, “Monsters, neither good nor evil, command a higher purpose in this world by creating elaborate and beautiful explanations for the relationships humans have with nature, themselves, and others. They have always served this purpose, as is evident from the earliest cave paintings to the latest popular media. Their conception and individuality, from the Yokai of Japan to the monsters of Greek Mythology, are the products of the cultures and environments they then function to serve. Karwacki’s bestiary questions both the cultural importance and role within the human psyche that these monsters play.”
Julia Oldham is an artist and storyteller who was raised by a physicist, a rock hound and a pack of dogs in rural Maryland. Born the same year as the Three Mile Island nuclear accident, Oldham has been consumed by scientific curiosity her entire life, and has sought through her work to understand the unknowable and transcend humanness. She frequently collaborates with scientists and finds hidden love stories in particle physics and theoretical mathematics, and ghost stories in wetland ecology. Oldham builds her alternate realities by combining photography and video with fantastical hand-drawn characters and landscapes; and this process results in work that rides a fine line between the real and unreal.

And me. My art, like my mind, is a combination of comedy and chaos, with elements of music, vintage horror and sci-fi. My work ranges from seven-foot-long cartoon metropolises, to fictional album covers, to take-out Greek diner coffee cups embedded with video animations. I also use nostalgic material from my childhood in the ‘90s, such as VHS Tape boxes and video game cartridges.